I'm not sure what my favorite quote is. I will need to think about that one.

What is your favorite quote of all time?

There are some really good quotes in the replies to Tina's tweet.

Including the one I just shared from Andrew Weatheraqll.

Fail we may, sail we must

Fail we may, sail we must

'Fail we may, sail we must' - Andrew Weatherall.. pic.twitter.com/YIiVINTxNh

Rob Macfarlane used to do a Word of the Day on twitter.

His word for Wednesday January 17th, 2018 was Apricity

the warmth of the sun on a winter's day

Personally, I like the definition better than the word.

The warmth of the sun on a winter's day, sounds better than Apricity. The phrase flows better, has more feeling, is more descriptive, than just a word.

I do miss his Word of the Day. Maybe it will return soon.

This is not possible. Except that it is.

What is this sorcery? pic.twitter.com/QV6U1NhXi0

This is not how Wind Energy works

"If Hillary got in… you’d be doing wind. Windmills. Weeeee. And if it doesn’t blow, you can forget about television for that night. ‘Darling, I want to watch television.’ ‘I’m sorry! The wind isn’t blowing.’ I know a lot about wind."

Donald Drumpf is an Idiot

Man. Trump says that because the U.S. has a trade deficit with Mexico, closing the border would mean the U.S. would make a "profit." That is extremely not how anything works.

A statement by the President: 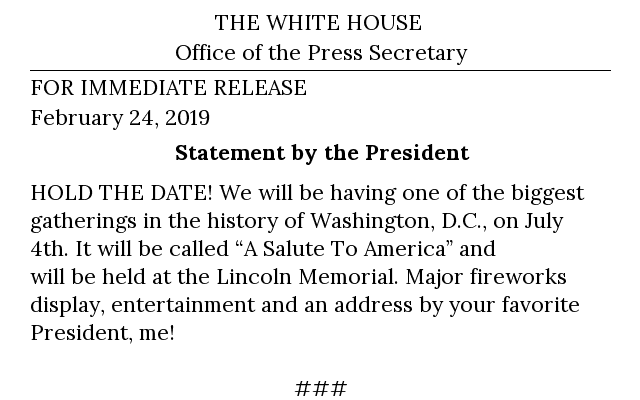 In the Age of Trump

Think about how things would look today if the GOP had held the House; something Biden made marginally more likely with that $200K speech. It's hard to imagine someone who doesn't get that -- who's talking bipartisanship in the age of Trump -- getting the D nomination. https://t.co/IQBMKfolrO

Trump has systematically changed the way the American People view the government. And not for the better. There has always been bitter division in our government. The change has been the open hostility towards the "other" side.

The hostility was always there, just hidden, under the surface. It was not openly spewed in front of cheering crowds. Hidden in calls to check birth certificates. Hidden in repeatly stating a president is outside his mandate.

We got the first open glimpse when Mitch McConnel said the goal was to stop anything Obama wanted to do and make sure he was a one term president. At that point, there was no going back. If the Senate Majority Leader was openly going to say, "It's us versus them and we're going to play dirty to win" ... There really isn't anything there to stop someone like Trump to come along and spout "Fake News" and "Enemy of the People" at the media, call people by belittling nicknames, and ignoring the general decorum of the office.

We can thank the Tea Party for starting us on this journey.

But, it has been Trump who has jumped in with glee.

Paul Krugman has an observation on the differences in America

So what we learned today is that there really are two Americas -- but rural/urban college/non-college doesn't really capture it. It's diversity in race and gender versus, um, bald white men.

Sometimes the trut hurts a little. Sometimes it is scary as hell.

We are moving closer to scary as hell territory for me.

If you feel at a loss for what to say to the people you care about when the going gets tough, just start with "I love you and I'm here." You don't always need to have the answers.

Well worth remembering that sometimes there is nothing you can do, other than just being present for the ones you care about.